The front door contributes greatly to the impression made on visitors to a period house.  Appearances were important, even if the decoration within were modest. Front door designs varied from period to period: Georgian through Victorian, Edwardian/Federation and Inter-War.

The key features of the front door, even though they differ in detail between the different periods, are as follows:

Attention to detail in this area is relatively straightforward to research and helps greatly in achieving an authentic outcome.

Victorian houses typically divided the wall decoration into three zones, at least in the main rooms: 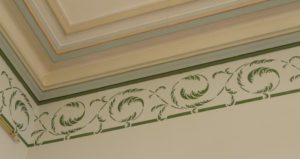 The trend for use of fluorescent and LED globes for lighting is beneficial in terms of greatly reduced power consumption and lower emitted heat. These globes can be fitted to many period light fittings, table lamps and standard lamps without difficulty.

However, many light fittings and lamps have globes that are visible, so it is important to avoid using globes that are of an inappropriate size or shape (eg a coiled fluorescent globe or a frosted LED candle globe: these are certainly fine for use under a shade or in an opaque glass, but not where they can be seen).

At this stage, too, the full range of LED globe shapes, sizes, bases and wattages is not yet available in Australia. This is gradually improving.

One further issue concerns lights fitted with dimmer switches, as only larger LED globes can be dimmed. Check with the supplier before buying any LED for a light with a dimmer switch.

There are quite a few indicators of the period of a building. In Australia, Georgian, Victorian, Federation/Edwardian and Inter-war houses can be differentiated by their facades, roof-lines, windows, building materials, veranda designs, timber joinery and so on.

Some buildings have features of the preceding or following period, as there was often a gradual transition from, say, the Victorian to Edwardian/Federation style.

An example is the roof: Victorian houses had slate or iron roofs, whereas Edwardian/Federation houses usually had terracotta tiles or corrugated iron – but slate roofs can also be seen in the later period.

Similarly, Georgian and early Victorian houses tended to have a symmetrical facade, often with a veranda across the whole front. Later Victorian houses often had only a partial veranda, perhaps with a return down one side. Federation/Edwardian houses were nearly always asymmetrical.

Talking of roofs and facades, Edwardian/Federation houses usually had open gable ends (a vertical wall forming a triangle under the roofline), where Victorian roofs were hipped (all sides of the roof slope downwards to the walls).

Want to know your heritage building’s period? The Authentic Age provides consultation services for restoration and extensions of old heritage buildings in Melbourne. Call us (03) 9818 4324 & talk to our expert now.